On December 5, 2013, news of Nelson Mandela's death at the age of 95, sent the world into a collective grief. Three years on, Madiba's legacy as a leader, a liberator, and a legend - continues to live on in the many monuments, foundations, and tributes which bear his name. In memory of Tata and his indomitable spirit, we look at some of the more iconic artistic representations of the statesman - which will remain, long after his death.

The statue of a young Nelson Mandela as a boxer - a pastime he had adopted for decades - stands proudly in Johannesburg, and is a tribute to Madiba's early beginnings in the city.

The impressive 6-metre-tall painted steel statue was commissioned by the Joburg Development Agency, and stands guard over the Chancellor House Museum and the Johannesburg Magistrate’s Court.

An interesting design feature is its unique lighting - which allows the sculpture to cast a shadow onto the court building behind it.

The bust of a smiling Nelson Mandela is mounted on a granite plinth, and stands proudly outside Parliament's National Assembly in Cape Town.

It was unveiled on the 20th anniversary of South Africa's attainment of democracy. 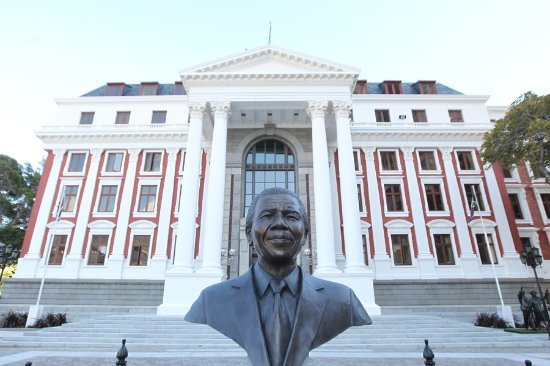 Another statue of Mandela was unveiled at Parliament Square in London, in August 2007.

The statue is 2.7-metres high, and cast in bronze. It was created by English sculptor Ian Walters, and at the time, cost £400,000.

Statue of Mandela at Nelson Mandela Square, in Sandton:

When Sandton Square celebrated its 10th anniversary -and 10 years of democracy in South Africa - in 2004, the most expensive stretch of commercial land in the country was renamed Nelson Mandela Square.

In commemoration of the name change, a 6-metre tall bronze statue of Madiba was erected at the entrance to the square.

The statue portrays Madiba in a dancing stance, which pays homage to the famous Madiba jive. 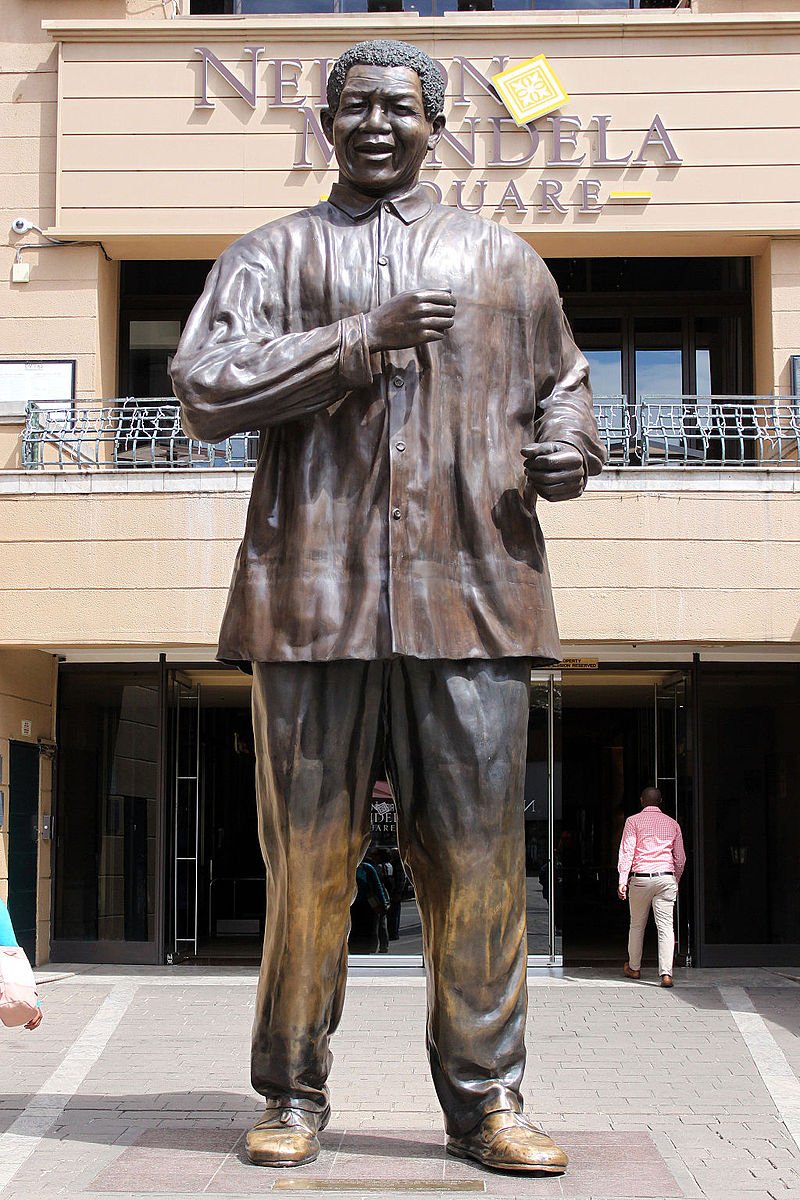 Probably the most unique tribute to Madiba is in our very own province, in the town of Howick.

On August 5, 1962, Nelson Mandela was arrested while driving along the town.

He had been posing as a chauffeur at the time of his arrest - having succeeded in evading capture by apartheid operatives for 17-months. His arrest was the catalyst for a series of trials, most notably the Rivonia Treason Trial - which would see him spend 27 years in prison.

The extraordinary sculpture by artist Marco Cianfanelli was inaugurated at the spot of his capture, in August 2012.

It comprises 50 steel column constructions - each between 6.5 and 9.5-metres-tall - set into the KwaZulu-Natal Midlands landscape.

The approach to the site leads one down a path towards the sculpture where, at a distance of 35-metres, a portrait of Nelson Mandela looking west - comes into focus as the 50 linear vertical units line-up to create the illusion of a flat image.

Nelson Mandela was immortalized in a statue at the Union Buildings in Pretoria, South Africa, on December 16, 2013.

The R8-million bronze artwork stands 9-metres tall, and is billed as the biggest statue of the South African leader.

It also has a tiny, barely visible quirk: a sculpted rabbit tucked inside one of the bronze ears. The rabbit in Madiba's ear is said to symbolise the pressure of finishing the piece – as 'haas' in Afrikaans means both haste and hare.

Check out the #NelsonMandela statue at the Union Buildings in Pretoria. Incredible pic by @hein_bence pic.twitter.com/ec1vSUB7IL

The famous Voting Line sculpture at the Donkin Reserve in Port Elizabeth, is an unusual tribute to the late and great freedom fighter.

The 38-metre-long metal sculpture of South Africans is connected together to make the voting line, with black metal seagulls hovering about the voters' heads. At the end of the queue is a metal cut-out of Nelson Mandela - standing victorious with his fist in the air.

It's a symbolic representation of the millions of South Africans from all walks of life who voted in the country's first democratic elections in 1994.

The Nelson #Mandela Voting Line sculpture represents all those who voted peacefully in 1994. http://t.co/ojQjMrP9Ln pic.twitter.com/GNIbzfGNiu

The Nelson Mandela statue in the Hague:

In September 2012, a 3.5-metre-high bronze statue of Nelson Mandela was unveiled in the Hague (Netherlands). Dutch artist, Arrie Schippers, was commissioned to sculpt the statue.

Struggle stalwart Ahmed Kathrada represented the Mandela family at the unveiling, together with Archbishop Desmond Tutu.

The statue stands on a specially created site on the Johan de Wittlaan, within the International Zone area of the Hague. 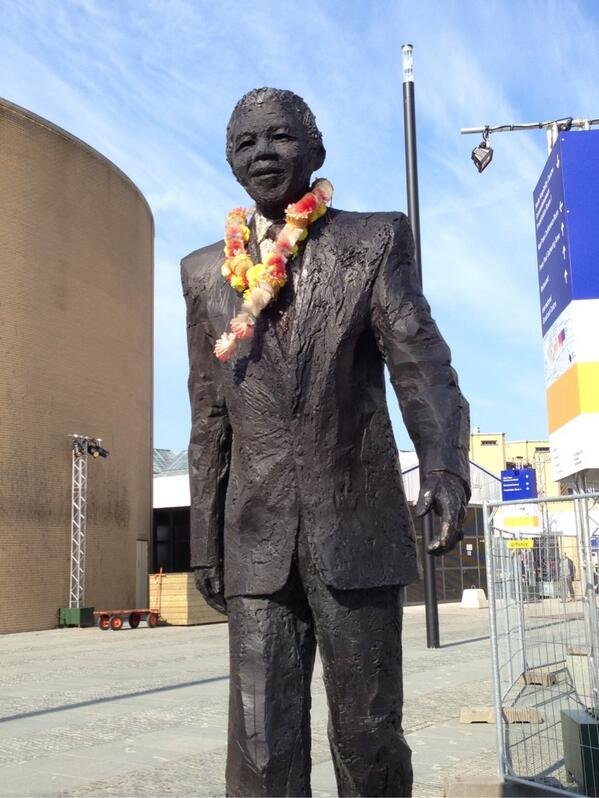 The Nelson Mandela Statue is situated on the first exterior level of the Royal Festival Hall. It was unveiled in 1985, in honour of his many years of political activism.

Mandela's story is inscribed on the plinth. The inscription reads: "The Struggle Is My Life" Nelson Mandela. Gaoled 5th August 1962. Sentenced to life imprisonment 12th June 1964 for his actions against apartheid. Erected by the Greater London Council. Unveiled by Oliver Tambo, President of the African National Congress 28th October 1985."

To this was also added: "Nelson Mandela was released after 27 years imprisonment 11th February 1990. Awarded Nobel Peace Prize 19th December 1993. Inaugurated President of the Republic of South Africa and its Government of National Unity 10th May 1994."

The current bronze statue replaces the original fibreglass sculpture after it was repeatedly vandalised and finally set on fire.

Nice Mandela tribute at the bust by the Royal Festival Hall... pic.twitter.com/O4f5wQM3TA