The 36-year old touched down in Durban on Tuesday night along with fellow Indian cinema star, Ranveer Singh. They are part of a heavyweight Indian TV and film contingent attending the prestigious awards ceremony at Durban’s ICC.

The artists, directors and other industry roleplayers will rub shoulders with some of South Africa’s top TV and film stars.

This is Tusshar’s first visit to Durban and he has told us he is looking forward to exploring our wonderful city.

The actor, who is the son of veteran superstar Jeetendra, has played both the good guy and the bad guy on screen. He has romanced and has been romanced. He has fallen in love and has fallen out of favour on film. He has  flexed his muscles and has flaunted his intelligence. But Tusshar says there is one thing he will not do in front of the camera and is light up. “I don’t know how to smoke. I’ve never smoked in my life. So I guess I will never smoke on screen.”

Despite his dad’s superstar status, Tusshar’s parents tried to give him a normal upbringing. He studied in the US for years before he could no longer resists the lure of Indian cinema back home. In the clip below, Tusshar talks about life in the media glare and life when he can just hang out and be himself at home. 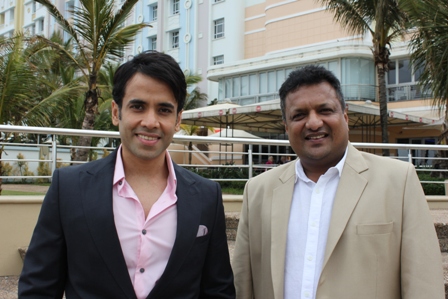 Celebrated Bollywood director Sanjay Gupta is also part of the SAIFTA contingent but his visit to the east coast includes business. He has told us he has extended his stay so he can scout around for suitable film locations.


SAIFTA will be hosted by Karan Johar and Dia Mirza. Legendary screen diva Madhuri Dixit will be performing tomorrow night, as will heartthrobs Ranveer Singh and Siddharth Malhotra. They will be joined by more than 40 Durban dancers who have been training for weeks for the event.

Tickets for SAIFTA are still available at Computicket.