Get your SAIFTA tickets now
Tickets for the glitzy SA India Film and Television Awards (SAIFTA) which will see Bollywood’s elite descend on Durban, have now gone on sale…

Tickets for the glitzy SA India Film and Television Awards (SAIFTA) which will see Bollywood’s elite descend on Durban, have now gone on sale…

Stars of Indian cinema, including John Abraham, Jacqueline Fernandez and Diya Mirza will join a host of SA celebs for the glamorous event which takes place at Durban’s ICC on Friday, 6 September.

Creative director of SAIFTA, Kedhar Gawde, says: “The South African audience is in for a spectacular show with a line up if some of the most popular names from the Indian cinema and television industry. Adding to the glitz and glamour of the event, will be popular Indian film actor, producer and former model, John Abraham as well as glamorous television actor and actress, Apurva and Shilpa Agnihotri.  Our aim is to secure stars for the event who would help us make these awards a household name in both South Africa and India.” 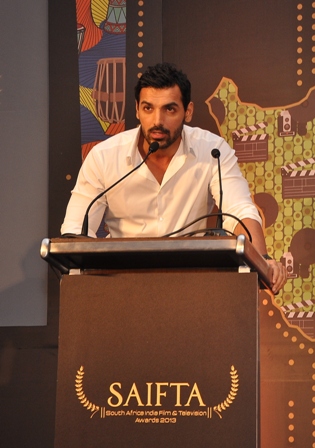 John Abraham at the SAIFTA launch in Mumbai


The red carpet arrival alone will attract worldwide television coverage.  Guests can expect a sumptuous dinner whilst watching a show that incorporates the Film & Television Awards for both South African and Bollywood films, as well as comedy, music, dance and fashion.

Tickets are now available through Computicket. Catch the two-day only ‘early bird’ ticket specials (Monday 5 and Tuesday 6 August only).  Tickets available on www.computicket.com  Standard prices range from R500 to R3 500 for VVIP tables with the stars.