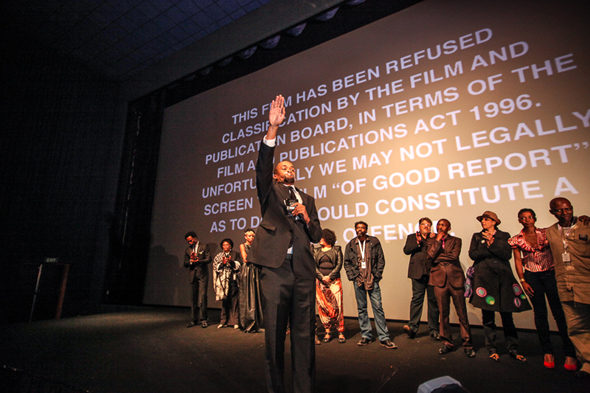 (Above: Film director Jahmil Qubeka at the announcement of the FPB's classification refusal of his film, which was to open the 34th Durban International Film Festival to two packed cinemas last night in Durban)
“Unfortunately, the film and publication board has refused to allow the release of Of Good Report. According to their communication to the festival, the film contains a scene which constitutes child pornography and we are unable to legally show the film. I am very sorry about this. Out of respect for the director of the film, we will not be showing an alternative film tonight [Thursday],” said film festival manager Peter Machen in a press release issued this morning.
“We chose the film because it was challenging, powerful and artistically successful, and particularly because it was such a strong expression of an individual voice. It presents a story of a very real and troubling social problem of rampant abuse of position in our country,” he added.
Qubeka, who had taped his mouth shut, chose not to comment as an act of defiance. Instead his wife, Dr Lwazi Manzi, spoke on his behalf, describing the horrors of abused young women by older men that she encounters daily as a doctor at a government hospital.
“Just because they (the FPB) don’t want to see it, does not mean it does not happen.” she said. “We shall not not talk about it. I am very proud of my husband, and the cast and crew. This is a pivotal day in the history of film in our country, one which will resonate in history.”
Qubeka and UKZN intend to appeal against the decision, failing which the producer, Mike Auret, himself a lawyer, will take it to the Constitutional Court. “It is not the function of state to moralise,” he said.
The festival screenings of all other films will continue as planned for the next nine days.
Read festival manager Peter Machen's pick of what not to miss at the festival here.
(Photos: Russell Grant)