A host of Bollywood stars have been streaming out of Durban after wowing the crowd at the first SA India Film and Television Awards (SAIFTA) on Friday evening….

We had a team stationed on the red carpet to capture all the glitz, glam and excitement.
Ramona Kasavan, Makhosi Khoza, Zaba Simbine and I got to rub shoulders with all the celebs – TV and movie stars from India and South Africa.

I can honestly say I have never experienced anything like it. The mood on the red carpet was electric as we jostled with TV crews from around the world.

If at times we seemed a bit too wide-eyed, it’s because we were star-struck. I couldn’t believe how gorgeous John Abraham looks in person – chiseled cheekbones, dimples-from-heaven and a smile that did weird things to my brain. Priyanka Chopra and Madhuri Dixit were consummate professionals – real pros on the red carpet. Impeccably dressed in designer threads, hair and makeup to perfection! Siddharth Malhotra, Ranveer Singh, legendary actress Waheeda Rehman, SAIFTA hosts Dia Mirza and Karan Johar and Tamil actress, Isha Talwar set pulses racing too.

On and on came the red carpet tidal wave of happy, beautiful people. South Africa celebs didn’t disappoint either. Stars from Generations, 7de Laan and Isidingo stopped to chat with fans and share a joke or two with the cameras. They included Jack Devnarain, Robert Whitehead, Latoya Mangezi, Donnalee Roberts, Leeander Reddy and Mutodi Neshehe among others.

Pity about the late start though. The event was meant to kick off at 7pm but only got underway at 8.30pm. No explanation was given for the long wait and I hope organizers were able to learn a lesson or two to prevent a similar holdup next year.

When the show did get underway, we were treated to performances from SA and India. The local rollout included dances and comedy acts from Aaron McIlroy and Jailoshini Naidoo. Local designers Haroun Hansrot, Alpa & Reena also showcased their ranges.

The Indian rollout was mostly dance – set against a magnificent stage and awe-inspiring décor. My highlight was watching Bollywood Dancing Queen, Madhuri Dixit, take to the stage with her grace, glamour and infectious smile. 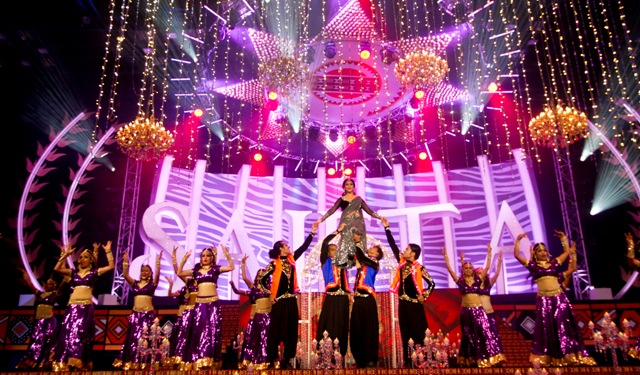 Madhuri Dixit had fans riveted with her nifty dance moves

She probably drew the loudest cheers from the audience!

Apart from the riveting entertainment, SAIFTA 2013 was essentially an awards evening in which a jury comprising TV and film fundis from India and South Africa, narrowed down entries to a handful of nominees. The best-of in TV and Film from both countries, were announced on the night.


Craig Strydom with his SAIFTA for Searching For Sugarman

Makhosi and Zaba, dressed by Durban designer Haroun Hansrot, got to hobnob with the stars in the VIP holding area (I begged them for a John Abraham autograph but sadly my pleas fell on deaf ears) as they waited to present an award.

SAIFTA will return to Durban  next year.