My first month in London

There’s something quite magical about starting your descent into London.  Each time I’ve been to the UK, it’s almost as though I could feel the pulse and pace of the city below me as we crossed the English Channel and began our final approach into Heathrow.

I think it’s different when you’re on holiday though. This time, now that I’m actually living here and thinking back. It’s like I’ve been swallowed up but the pace of the city.  Where has this last month gone to?

It’s like I touched down and hit the ground running and then this morning, it suddenly dawned on me I’ve already been here a month.
It’s been chaotic ….and I literally haven’t stopped.

Finding a place to live has probably been the biggest challenge, and to be honest, it hasn’t been easy, but it’s like anywhere really, you want to settle somewhere that’s convenient and affordable, so that’s taken up a lot of my time.

Choosing the right place and in the right area takes effort. Just like anywhere, you also need references, and the letting agents need to do credit checks etc – so it’s a process… and that process takes time.

Then I got flu.

After the mad rush of leaving South Africa and trying to finish a million things before departure date, I think my body just shut down when I landed here and said ‘enough’ s enough’.

I was man down for two weeks and I’m pretty sure you heard if you were listening to my show how blocked up I was. But – I’m over that now and feeling strong again!

I also took my little rescue dog with me to London so he arrived a few days after I touched down.

Now that was stressful … but when he arrived at Heathrow, I think I was more shaken than he was.

He strolled through customs like he owned the place … but watching him, I think he’s still a little overwhelmed by everything.

I know he’s loving the long walks in the park and chasing squirrels but having never seen a squirrel before, I think he’s confused as to what they are! And no matter how fast he is, the squirrels are always faster!

For now, I’m staying in Fleet, a town in the Hart district of Hampshire which is only about 40 minutes on the train into London central.

It’s a stunning place. Spotlessly clean with about 37000 people living here (including some South Africans)!

I was in the pet store last week getting Jabiru (my dog) some food when I heard a voice say “Sorry, aren’t you Damon Beard?”

A family from Durban on holiday right here in Fleet – and who listen to East Coast Gold!

My former producer, Simon Carter, is now also living in London. He arrived about a month before me and we’ve met up twice in the time I’ve been here.

We’ve done the normal tourist attractions but both times we’ve met, we’ve ended up in the pub.

I think it’s the amount of walking we did that made us tired and need a pint!

It’s been awesome to see him though and he stays about 20 minutes away so it’s great to have a mate to call or meet up with. 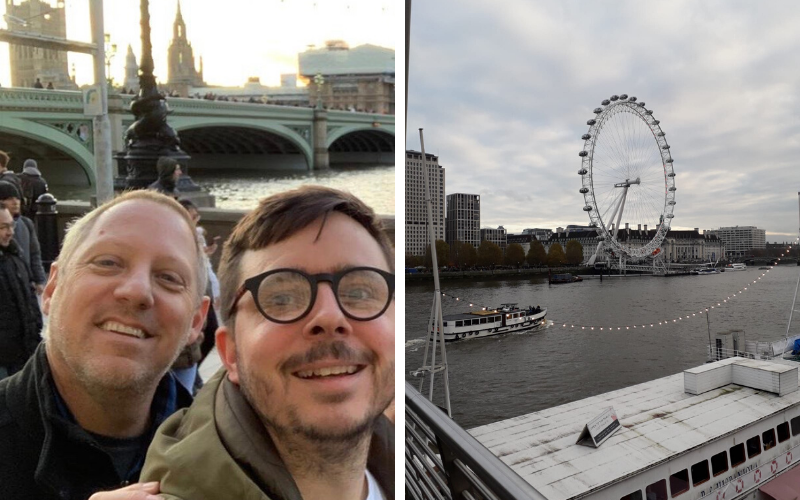 I’m pretty lucky as I also have some other really good friends who live here (Roz and Rob) – they emigrated here a few years back and when I told them I was coming over, they promised that we’d have a braai to celebrate – no matter what the weather was doing!!!

So, true to their word, we had a braai – in the freezing cold.

I think people must get used to the cold here though because Rob had shorts on while I was dressed like I was heading to the North Pole.

Christmas is a magnificent time of the year here and the lights just make London exquisite.

People really get into the spirit of Christmas here.

They decorate their houses with fairy lights, wear Christmas jerseys and hats to work and you can’t help being here and not feeling the spirit of Christmas.

As the New Year approaches, there are many exciting opportunities for me … but I’ll leave those details for the next time we touch base.

It’s awesome to be in touch and to be able to chat to you each weekday afternoon from 3pm – 7pm on East Coast Gold.

I really hope you’re enjoying it as much as I am!

So until next time, here’s wishing you and your loved one’s a wonderful Christmas and an amazing, successful and healthy 2020.