Durban man's travel experience in a time of coronavirus

East Coast Radio had a chat with Durban local Justin James, who returned this week from a trip to Indonesia amid the coronavirus pandemic. He takes us through his travel experience of Hong Kong airport, the general feeling in Indonesia, and when he first became uneasy with the situation.

The coronavirus pandemic has the world on tenterhooks.

South Africa is currently in a national state of disaster, while countries like Italy are on full lockdown.

Travel is very much restricted in these difficult times, with South African President Cyril Ramaphosa banning the travel of individuals to and from the hardest hit areas.

Durban local, Justin James, has just returned from a dream holiday in Indonesia, where he and his partner visited Bali and the small town of Ubud. James departed before South Africa's travel restrictions were put into place, but there was still a sense of apprehension given the scale of the issue in Asia.

"We were definitely apprehensive. The week that we left, which was Sunday the 8th of March, there was a lot of stuff around the coronavirus in Indonesia and the capital city of Jakarta," he says.

"My family tried to convince me not to go, but we booked the holiday last April, so we decided to take a chance and be safe with our masks, sanitisers, and other safety precautions."

With the COVID-19 outbreak originating in China, you would have expected neighbouring countries to have adopted very strict rules from the word go, but James admits that Indonesia was a little more relaxed in terms of what was happening around it, as only one case had been confirmed in the country's capital, Jakarta, at the time.

"In Bali, there were a lot of foreigners. The foreigners kept their distance and used hand sanitisers and wipes. Two of the attractions that we went to checked our temperatures," James says.

"In general, people were aware of it. Our taxi driver asked us if we were not concerned about being in Bali and being so far away from home, so there was an awareness. It wasn't a massive concern at that stage as there was just one confirmed case in Jakarta.

"The road our hotel was on is called Monkey Forest Road, and there are a load of restaurants. It was packed with tourists in an open-plan environment. No one wore masks in the restaurants themselves and we had to take our own sanitisers. The restaurants had no guidelines and it was down to the individuals to stay clean."

READ: A guide to social distancing 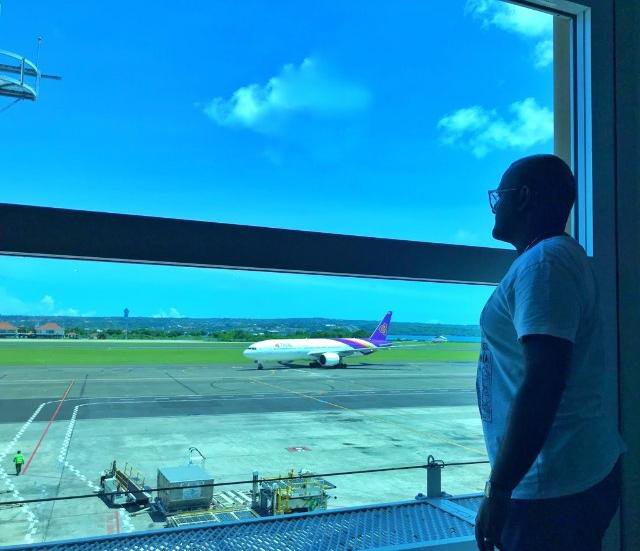 Airports are considered high risk zones at the moment, as they are places where many different nationalities gather - hence the strict travel bans being imposed and stringent screening of passengers.

James says Hong Kong's airport was very strict in their measures, while the same applied to landing in Bali.

"We travelled through Hong Kong and Bali. They were really strict at Hong Kong airport," he explains. "There were a lot of people with masks, as Hong Kong is just off mainland China. They checked our temperature when we got off the plane from Johannesburg. They did the same at passport control and then when getting onto our connecting flight. We had to fill in a health declaration form, with the same happening in Bali. There were hand sanitisers everywhere."

James and his partner arrived back in South Africa a day after President Ramaphosa declared a national state of disaster. The protocols in South Africa were very similar to that of what he experienced at the international airports he moved through.

"We arrived back in South Africa on Monday morning at 7.30am. We flew with Cathay Pacific and the plane was really, really empty. I'm assuming that there were 50 or 60 people on the entire aircraft. When we landed in Johannesburg, the air hostesses asked us to remain seated before two health authorities, I'm presuming from the army as they were wearing berets, tested us. They used a mobile temperature screener. We were checked again at passport control before heading off to our flight to Durban," James says.

As is to be expected, there is a sense of panic and anxiousness setting in around the globe. However, James says the only time he felt unsafe on his travels was when he was preparing to return home.

"When we got to Bali airport to return home, there were quite a few South Africans trying to get home as soon as possible. While waiting to depart for home, we met a young German couple and a South African couple with a baby. They were both supposed to stay in Bali for two to three weeks, but they wanted to return home so they did not get stuck, as there were fears of lockdowns. At that point I was slightly scared, as I didn't want to be refused entry back into South Africa," he concludes.

James is now in self-quarantine in Durban for the next two weeks and is working from home.