Wendy on the no credit card, no flight policy

If you have a valid, paid-for air ticket in your hand and proper identification, and your seat hasn’t been double-booked, you should have no trouble getting on the plane, right?

Well, when it come to Mango airline, you need to produce one more thing in order to be allowed on the plane, if the ticket was paid for with a credit card: that credit card, or at least a copy of it. Fail to produce such evidence and you simply won’t be allowed to board, as many have discovered.

Another SAA subsidiary, SA Express, has the same policy.

It happened to me a couple of weeks ago, actually.

I was due to speak at a conference in Midrand, my Mango ticket having been paid for by the conference organisers, with a credit card, a copy of which I hadn’t been sent.

I’d checked in online, and was told to stand aside when I tried to board. I got hold of the organisers, who sent me a photo of the card used, but the Mango crew member insisted it was the wrong card. Can you believe it!

It was only thanks to the intervention of Mango’s communication manager Hein Kaiser - who I texted in a bit of a panic - that I was able board the flight at the last minute.

Last Tuesday, three Durban journalists, who’d flown from Durban to Jo’burg for a press conference, were all barred from boarding their Mango flight home that evening, due to lack of card proof.

Mind you, the crew manning the boarding gate did say they could buy new tickets - at R2500 each, which they declined, unsurprisingly.

Their host couldn’t get the card proof to the boarding gate in time and they weren’t able to get on to a later flight, so all three were forced to overnight at an airport hotel and get a 6am flight home - at a cost of R2200 each - the following day. You can imagine the disruption to their lives that caused. And a huge additional expense for their hosts.

And I’ve since heard from many people who were missed planes because of this credit card issue, including a Zambian woman, Edith Silengo, whose relative bought her a Mango ticket to fly to Port Elizabeth to attend a funeral.

“When I reached OR Tambo airport,” she said, “I got a shock as I tried to board my next plane - because I didn’t have a copy of my relative’s credit card, they said I couldn't board.

“Because I didn’t want to miss the funeral, I had to pay again. It was devastating for me.” 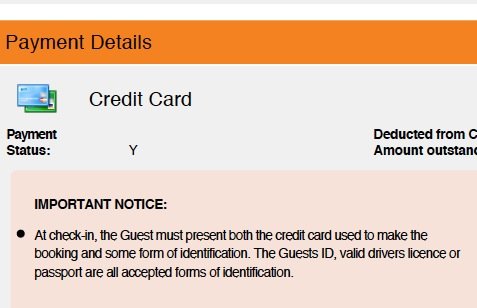 I had another look at the confirmation email I was sent by Mango when I checked in online. Towards the bottom, the disclosure does appear: “At check-in, the guest must present both the credit card used to make the booking, and some form of identification.”

Given that most domestic airlines don’t have this policy, or don’t implement it, the disclosure should be more impossible-to-miss, and included on online boarding passes - in huge letters, in my view.

The airline’s Hein Kaiser said it was  “to protect cardholders” due to the enormous amount of credit card fraud.

“We do communicate this in our terms and conditions as well as on all booking confirmation emails and in media releases over the years,” he said.

But it seems the airline is now having second thoughts.

“We are presently investigating different options to this process in order to minimise inconvenience to our guests while simultaneously protecting cardholders,” Kaiser said.

Good move. Routinely alienating and grossly inconveniencing legitimate would-be passengers is not in anyone’s interests. Credit card fraud is clearly a huge risk to all online businesses. But other airlines have found less consumer-unfriendly ways of dealing with it.

And in the meantime, if you’re planning to fly Mango, and the ticket was paid for with a credit card, make sure you’ve got the proof in hand when you leave for the airport, or you’ll be unceremoniously grounded.