Five Traditional Healers from KwaZulu-Natal – who're central to an innovative HIV/TB programme run by a local NGO and the KZN Department of Health – have been hosted and honoured for their work in Cambridge, Massachusetts in the United States, by the prestigious Ragon Institute.

The five-day trip coincided with celebratory events marking the 10-year-anniversary of the Ragon, including the Institute’s work in South Africa, and culminated in a gala dinner last Friday where it was announced that a $200-million USD gift (R2.9 billion) from Terry and Susan Ragon was made to Massachusetts General Hospital, the largest single gift in the hospital’s 208-year history.

They help to train other healers to provide a critical link between the community and local government clinics, and ensure patients don't delay seeking critical medical care at a clinic.

KZN Health MEC Dr Sibongiseni Dhlomo says: “Traditional healers are a very important part of our society. They influence the direction of the patients in terms of seeking health. It therefore makes a lot of sense to recruit, train and convert them into ambassadors for health. We are extremely grateful to the Ragon Institute and ITEACH for the work that they are doing in our province. We also congratulate the five Traditional Healers who went abroad, as they will come back and share their experiences with their colleagues.”

Dr. Krista Dong, founder of ITEACH, says: “Since 2009, ITEACH has been training Traditional Health Practitioners (THP's) as certified HIV counselors, who are able to provide support to the vast majority of patients who utilise both traditional and western health services, thereby ensuring safe and culturally relevant integration. To date, almost 400 THP's have been certified by ITEACH, creating a network of knowledgeable and skilled HIV care providers.”

The five Traditional Health Practitioners who flew over to the US last Tuesday were part of the first group to be trained and certified as HIV counselors by ITEACH in 2009. On their arrival in Cambridge, they were received in a welcome event held at the Ragon Institute. 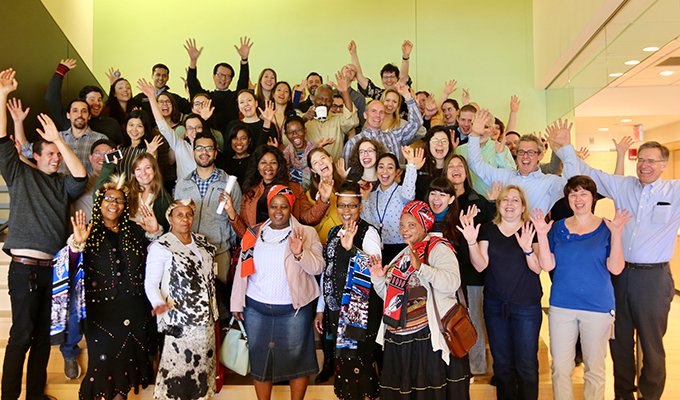 “It was such an honour to be part of the team that went to the US,” says Ngenzeni Mbhele. “The professors and students were so excited to see us. It brings me so much joy to see that as Traditional Health Practitioners we are so important.”

“There was so much interest in what we do,” added Tholakele Memela. “We were asked a lot of questions about our work as Traditional Health Practitioners, as well as being part of the ITEACH team and working to support the Department of Health as HIV counselors.”

As special guests, they were escorted on tours of the research laboratories at the Ragon Institute, the expansive campus and research facilities at the Massachusetts Institute of Technology (MIT).  Their work is already well known to many of the scientists, as the healers have hosted them on their visits to South Africa.

“Terry Ragon met the healers on his first visit to South Africa -- a visit that convinced him to him get involved and ultimately to give the initial $100-million USD gift (R1.4 billion) to establish the Ragon Institute ten years ago,” explains Dr. Dong. “Subsequently, his wife Susan Ragon, made several visits to South Africa that included spending time with the traditional healers and learning about the work they do with ITEACH and the Department.”

“Susan Ragon drove much of the planning of the 10-year Anniversary event, and she personally ensured that the Traditional Healers were part of the gala event, which highlighted the healer’s work as part of the important accomplishments of the Ragon Institute over the past decade,” Dr. Dong adds.

A six-minute video by East Coast Radio's in-house video production unit East Coast TV - showcasing the work of ITEACH and other Ragon Institute projects in KZN – premiered at this event.

Following the screening, the Traditional Healers were welcomed to the stage and provided a special traditional thanks for the work of the Ragon Institute over the past decade and a blessing for continued success in to the foreseeable future.

“It was such an honour for the healers to have their work highlighted at this event,” says Deli Mthimkhulu, who runs the healer integration programme at ITEACH and has worked for MGH linked research initiatives for over 15 years.  Mthimkhulu travelled with the healers, and added, “We know the important role that the healers play in linking and keeping patient in HIV-care, but it is great to have it acknowledged in this way."

Among those in attendance at the event were prominent US academics, scientists, donors and a Nobel laureate. Musician Sting performed at the event.

Watch the video below:

ITEACH  is a non-profit organisation affiliated with the Ragon Institute and the HIV Pathogenesis Programme at UKZN's Nelson R. Mandela School of Medicine and funded by philanthropic support from the Witten Family Foundation.