In this week’s Snake Rescue podcast, Nick Evans is called out to Westway Office Park in Westville for two black mamba males fighting over a female.

Most snakes come together in spring to mate, but mambas are not most snakes! In the cooler months, female mambas leave a scent trail in their wake, which male mambas pick up and track using their forked tongue.

Should two males bump into each other in the vicinity of the female, they'll break out into fight mode!

They entwine their bodies in one another, and wrestle it out for the mating rights. The winner claims the girl, the loser leaves with nothing but a dented ego.

They don't fight till the death, nor do they really hurt each other. It's just a wrestling contest.

That is exactly what happened in this episode of Snake Rescue which takes place in the Westway Office Park area, Westville.

Some lucky bystanders were privileged enough to watch the action – and called Nick Evans in to assist!

"In winter, something I always hope to see is mamba combat. Not because I'm a blood-thirsty lover of violence, no. But I think it is such a spectacular sight, two see two of Africa's largest venomous snakes wrestling it out! And, what's great, is that they don't fight till the death either- bonus! To be called to remove two fighting mambas is a challenge I always look forward to!" says Nick.

Listen to what went down below. 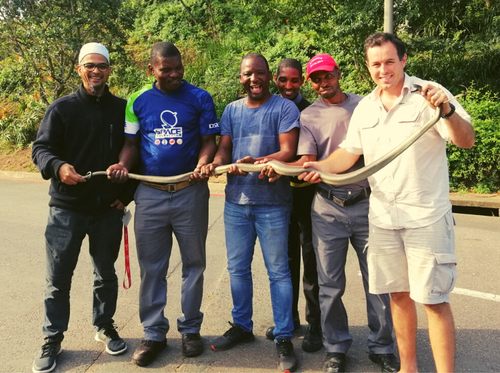